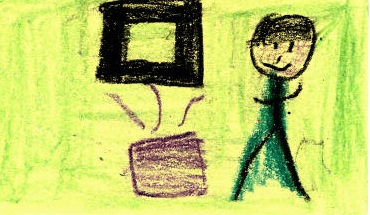 In the first chapter, the kid bought the comic book so he could read it. And he was recognizing the super villain from the TV show that he watched.

I think it was extraordinary and awesome because the super villain was the coolest, bravest, and meanest villain ever. He was bad because he wanted to destroy the world so he could keep it by himself. He’s cool because he is so shiny and brave. He was brave because first he wasn’t brave and now he tried and he did it and now…he is so so brave.