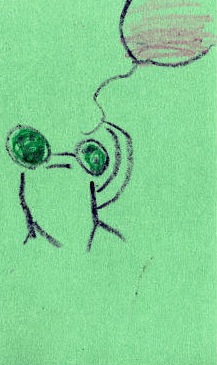 The two frogs, Tiana and Naveen, were flying. In the night three alligators were going to eat Tiana and Naveen. Tiana and Naveen were scared. In the morning Tiana and Naveen found a friendly crocodile who plays the trumpet. In the night Naveen was scared because he had a bug on his hand. Tiana was dirty. A fish jumped in back of Tiana. Tiana and Naveen were caught by frog catchers. The sun hurt the little catcher. They were free, and they were happy. The snake said to Tiana and Naveen they were tasty. Dr. Facilier captured Naveen. Lawrence had a cursed necklace. Tiana was first chopping the leaves to find a path. Dr. Facilier was scary. Lawrence was a little bit scary. Lawrence had the frog in his hand. The fly was scared and he had the cursed necklace. The two frogs were on the funny crocodile who plays a trumpet, and the crocodile followed the biggest firefly. In the night the stars were twinkling. Naveen was sad when he was inside the cage. When he found Tiana, he was happy again. Because Naveen saw Tiana again, both of them were happy together. I like this book because in the end Naveen and Tiana were together. It was a happy ending. I want to deliver this summary to Miki.

I think it is a very happy book. As the book continues, the pictures become a little happier. On the fist night, it got scary because the alligators wanted to eat Tiana and Naveena. But by the next afternoon things were happier and sillier because every person was dressed like it was Halloween. So this made me happier as well and I liked this book so much that I want to keep it.