Geronimo Stilton: The Third Adventure in the Kingdom of Fantasy

Geronimo Stilton: The Third Adventure in the Kingdom of Fantasy 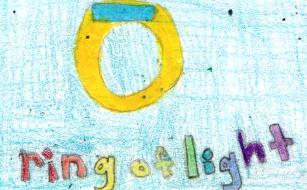 On the first day of spring, Geronimo was in his office working, when his nephew, Benjamin, strolled in. They talked about celebrating spring with a family reunion at Geronimo’s house. After having the reunion, Geronimo couldn’t fall asleep which leads him fainting in the bathroom. Then, he woke with a sudden gust of wind, it his dear friends The Rainbow Dragon, and Scribble hopper. Calling for an emergency! Queen Blossom of The Kingdom of Fantasy has been captured! Geronimo agrees to go to The Kingdom of Fantasy! They stopped at Gnome Kingdom for the night, and thought how to save Queen Blossom. That’s when the company was born. While sailing to the land of nightmares, Geronimo was the true peacemaker and could be able to use the ring of light. Will Geronimo be able to save Queen Blossom? And will he be able to eat his chocolate cheesy chews?

I loved this book because it has a balance of action, fantasy, drama, and humor. Another thing, my favorite part of the book would be when Geronimo accidently knocked himself out in the bathroom when he couldn’t sleep. The illustrations were very detailed and very colorful making it more realistic with blues, reds, and greens. This book is part of a series but not similar to the other books due to the fact that Geronimo was in a never before heard place. While reading the book, it felt like I was really in the castles, and battles along with Geronimo. This book will make you read non-stop until you get to the end of it.

Even if somebody or maybe you had never read the Stilton series, you’ll never put down this book. I highly recommend this book to people with a taste for fantasy, to read this book. Or, just for fun.

YM
is a student in
Mr. Fulton's 5th Grade Class