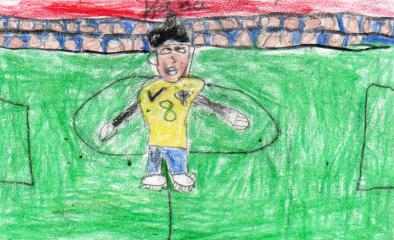 I read about a soccer player named Kaka. He is a really good soccer player. They say he was born in 1983 on April 22. He could control the ball with both of his feet. He started playing soccer since when he was 11 years old. He was the most awesome player ever. He made a lot of goals. He was on many kinds of teams. One I know is in Brazil. He really runs fast, and he has the number 8 on the back of his shirt. He plays either middle field or forward. He and his team work together really well. He won a trophy and a big one for his team. Kaka has a family, a wife and 2 or3 kids.

My favorite part is that he won a trophy. I wish I played soccer just like him. It made me think about wanting to be like him, having a family. The book reminds me about when I was on a team before and we didn’t win that many matches, but all the people said that I was a good goalie. I really liked this book. I like it because I like soccer and it reminds me about when I was in a team. Do you like to play soccer? If you do, you will learn a lot from this book. I bet Brazilian people are proud of this book.

VCR
is a student in
Mr. Fulton's 5th Grade Class