Return of the Mega Mantis

Return of the Mega Mantis 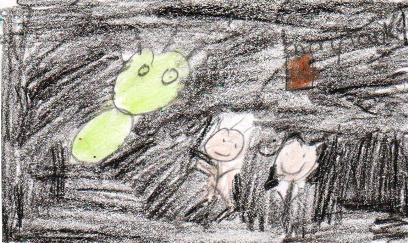 This book is about Stella and how she saw the mega mantis in her backyard. I wouldn’t want to see a mega mantis but in this book Stella did. So she yelled her lungs out and screamed,“HELP!” If I were her I would do that same exact thing she did. Her mom came and said “What’s going on.” Then she just walked on because the mega mantis was gone. The next day it came back to school. Everybody went yelling and running home. Damon and Ranger got in big trouble so both of their dads had to come to the office too but everything worked out. They had to apologize to the principal and to the teacher. Read more to find out if the monster squad defeats the mantis or not.

It was an interesting book because the book is a mystery book and I love mystery books. The book helped me understand it because the author added details of how the characters looked in the book and she described the characters and I could imagine the people in my head. The pictures only helped a little because it was a chapter book. You know that chapter books only have little pictures. I liked the part when all of the people who went to that school ran away while they were screaming. The character I want to be in the book is Stella because she is smart and she is kind, and I kind of like her because she was the one who was all like I know.

RG
is a student in
Mr. Fulton's 4th-5th Grade Class