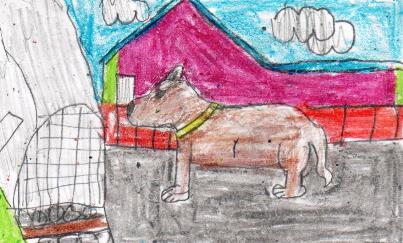 The book Hachiko Waits is about a loyal dog. It all starts in Japan, when Hachiko’s owner, Professor Euno, goes to the train station to go to work. Suddenly, Hachiko follows him. Professor Euno lets Hachiko come this time. When they got there, a little kid named Yasuo starts petting Hachiko. Professor Euno greets him and his mother. Later on Professor Euno leaves Hachiko with the Station Master. From that day on, Hachiko went to the train station in the morning with Professor Euno, and came back in the afternoon. But the Station Master didn’t take care of him. So, Hachiko went to Professor Euno’s house and came back before Professor Euno returned. One day, Professor Euno went to work but didn’t come back. The Station Master knew what had happened. He told Yasuo and his mother when they asked him. They all knew it except Hachiko. Hachiko waited for a long time, until the next day. Read and find out what happens to Professor Euno and what will Hachiko do. Here are my opinions about this book. Likes: I like it when Hachiko eats Yakitori. It makes me feel hungry. The best part is that Hachiko waits for ten years for Professor Euno. That’s really impressive although people gave him food. Dislikes: when Hachiko dies. Also, the movie is a little more different than the book because the movie takes place in New York while the book takes place in Japan. In the book, Yasuo says that he wants people to donate money to him to pay someone else to make a statue in honor of Hachiko. I would recommend this book for kids who read really well and adults. They can read this book to their children even though it’s a long book. Adults can read at least a chapter a day until they finish the whole book. This book will teach your children that reading a book isn’t boring.

RM
is a student in
Mr. Fulton's 4th-5th Grade Class