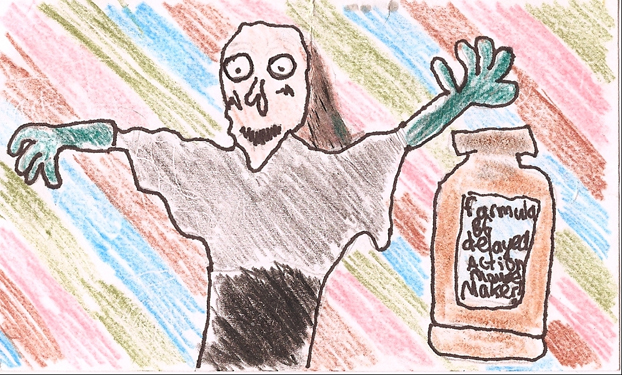 Have you seen a witch? Well then in the book, The Witches the main characters are the boy and the grandma. The boy is very brave. He is brave because his tail got cut off and he didn’t even care. The grandma is very kind to the boy because she takes care of him. She is smart because she know a lot about witches.

The big idea is that the boy goes to the ballroom and finds 85 something. Do you know what the boy finds? Well then the best thing to do is read the book. The lesson of the story is no matter if you are small like a mouse, you can be a human and act like a human. Also if you find witches try to find a different place to hide and don’t eat chocolate from strangers. Also you have to listen to your parents and grandparents.

At the beginning of the story it seems to be that the grandma was a witch because she knows a lot about witches. The book is a mystery because you don’t know what is going to happen to the boy next.

The grand high witch is very scary because the boy nearly screamed out loud because when the grand high witch took the mask off she was very frightening. Her face was so “crumpled and wizened, so shrunken and shriveled and looked as though it had been pickled in vinegar.” It was kind of rotting. In the middle of her face, around the mouth and cheeks, the boy could see the skin all “cankered and worm-eaten, as though maggots were working away in it.”

The special event takes place in Hotel Magnificent, where the boy comes to the ballroom and sees a special thing. Can you guess what the boy saw?

I think the book was very interesting. I liked it because I got to see everything that the boy and the grandma went through, because after the boy’s parent died, to finding the witches in a ballroom, is very interesting to me. My favorite part in the book was when the grandma was telling the boy about the 5 kids that vanished. I was psyched to see them and how they vanish. My other favorite part of the story was when the boy was trying to train the mouse. I thought that was funny because the boy was trying to make a circus with mice.

I liked the boy because it was cool how he saw a witch in the back of the house. The boy was very scared that he climbed a tree all the way to the top. I don’t like the Grand High Witch because she was trying to change all the kids into mice, by giving them chocolate with Formula 86 Delayed Action Mouse-Maker. I felt worried when I found out that the boy was seen by the witch and I felt funny when Bruno was stuffing bananas in his mouth.

Amanda R.
is a student in
Page Turners After School Program / Rauschenbusch Center