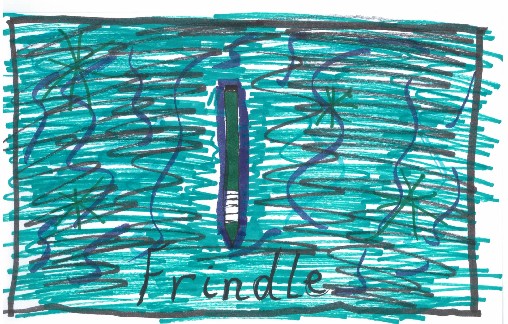 Frindle is a very good book by Andrew Clements. It's so good it got the Christopher Award which is given to books that teach good values. In the story, a boy named Nick makes up the word "frindle" to take the place of pen. It makes his school go crazy! His teacher, Mrs. Granger, begs hime to stop but the word spreads so fast. Eventually the whole country finds out about it! You should read the book find out if "frindle" becomes a real word.

I really liked the character of Nick. His is a troublemaker but he is also very smart. Nick is the kind of boy that would get detentions. I am like him because my sister and I like to make up our own words too. My favorite part is when Nick's dad sells the word to someone who wants to make t-shirts and pens and other things with the word on it and then Nick gets all the money.

I recommend this book. It is amazing that a boy can make up a word that is so funny. I think that 2, 3, and 4 graders would really like this book!

Shoshana E.
is a student in
Mrs. Rosen's Class