For Your Eyes Only

For Your Eyes Only 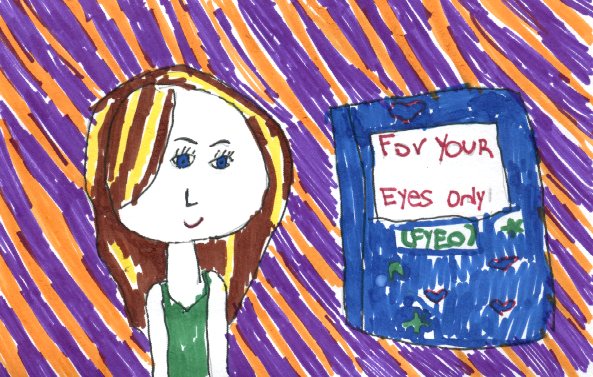 When Mr. Moffat, Lucy's substitute teacher, gets the whole class journals, Lucy pours her heart out to him in her journal entries. Lucy writes about everything. The two major things she writes about are her mom and Andy. Her best friend is Beatrice, who maybe isn't such a good friend after all. Meanwhile, Andy, the class troublemaker, does nothing but draw exploding fighter planes in his journal.

Lucy's parents are divorced. her father moved to San Francisco and remarried. She only visits him during spring or summer break. Lucy tells Mr. Moffet how she wants to write poems like the ones he puts up on the chalkboard every Monday. She also tells him about her secret love.

Andy starts writing too, especially when ducks fly into the Seaview Apartments. But Andy's stepfather tries to get rid of them. Andy's stepfather abuses him and mis mother. Soon Andy and him smotehr leave for Arizona where his grandparents live. Eventually Lucy runs out of room in her journal, bus she feels better for getting everything on paper.

I wouldn't change anything about this story because it was perfect the way it was. My favorite part of the story is when the ducks fly into the pool because I love animals and that part was very funny. My favorite character is Lucy because she is honest, helpful, and caring.

This story relates to my life because like Lucy, my parents are divorced and I hardly see my dad. The pictures in the story didn't really help because all they showed were the pictures that Andy drew in his journal or the poems written on the chalkboard. I would recommend this story to third graders and older students because although it is funny and great, it is also a little sad.