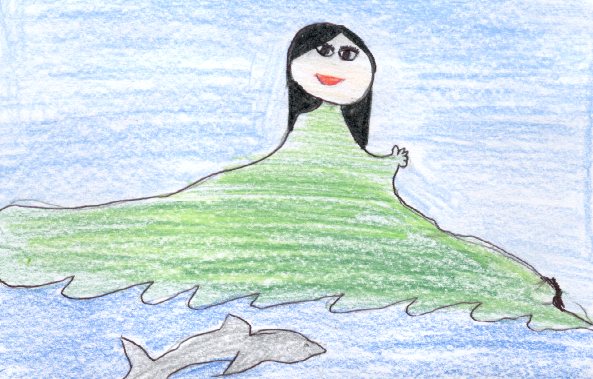 In the story, Island of the Blue Dolphins, by Scott O'Dell, a 12 year old girl named Karana lives on a beautiful island with her Native American tribe. She lived with her 6-year old brother, Ramo, her father, and her close freinds in the tribe because her mother passed away. Then one day a group of men named the Aleuts came on there territory and wanted their land. The tribe let them stay on there island, Island of the Blue Dolphins, for a while but then one day the Aleuts killed many of the native animals, like seals, dolphins, and sea elephants. The next day, the Aleuts and the Native Americans went to war. After the long painful war, the Aleuts won, and the tribe was forced to leave their long loved island. But Karana's dad would sadly would not go or stay because he passed away during the awful war. A few days later, everyone, including Karana, got on a ship and sailed off the shore heading to Santa Barbara. Karana, crying, while sailing away, saw a rod coming off a hill and a boy holding it. As she looked closer, she saw that it was Ramo. She yelled and screamed telling her tribe to go save him. But, shockingly, nobody cared. So, that second, Karana made a life changing decision to swim to the shore, just to know that Ramo was safe.

Karana and Ramo were living pretty well, especially because they had to defend themselves from their enemies, the wolves. They made weapons, a shelter, and fished for food. The weapons were made to kill all the wolves. They needed to do this because the wolves were hungry and would eat anything. But every day Karana would tell Ramo to never go to the wolves' territory alone. Yet one day Ramo went to try to kill a young wolf, and he never came back. Karana looked for him for many hours and then she found him lying dead on the floor. The wolves ate not only her brother, but her best freind and only help too. Karana then promised herself she would kill all of the wolves, and after a while she killed all but one, the leader of the pack.. She always thought he was evil, but then she realized that he was the last living thing on the island she could talk to. So she kept and traind him. Karana even named him Rontu, which meant handsome. They became best freinds. Yet she still was heartbroken about having her brother pass away. As she thought things couldn't get any worse, a huge sunami struck! She luckily knew how to keep safe and ran to the very top of the island where the waves couldn't reach her. She was safe but the island that she used to know was destroyed.

Karana was unharmed, but she was sick and tired of waiting for her tribe to to send her help and she was so worried about all her friends. Then one day she saw a boat and ran onto shore screaming for joy while packing. The boat's sailors said that they came to rescue her. That very day, she sailed away but heard some bad news. Her whole tribe got struck by lightning and passed away during the voyage. Karana then found out that if Ramo didn't stay on the island, she would have passed away too. But instead, she lived in a church in Santa Barbara after being saved.

I would have changed one thing about the story, and that is that I wish that Ramo hadn't died. That would have made the book a lot better. My favorite part of the story was when Rontu and Karana became friends. I liked this part because Rontu did deserve a second chance. My favorite character was Karana because she always stayed strong during the worst of times. My least favorite character would have to be the Aleuts leader because he was rude enough to think that it was fine to take someone else's land for free.

This story relates to me because I sometimes go through tough times, but like Karana, I stay strong and wait for something better to happen. This story doesn't have pictures, but I don't think it needs them. I think that others should definently read this story because it teaches a good lesson, that things won't always go as planned, but you should always have hope. It is a great story for any body.