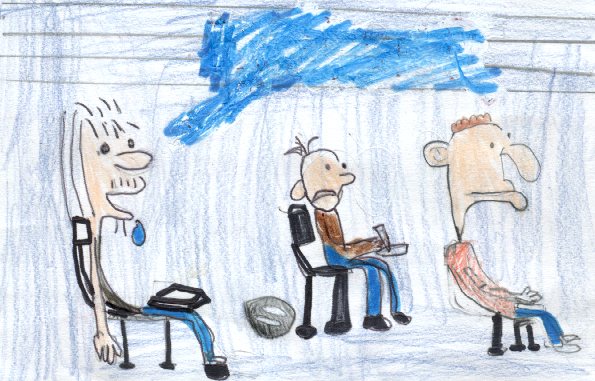 Greg gets a diary from his mom but he calls it a journal. He writes about how he gets picked on at school. He also write about his best friend, Rowley. Rowley writes a book called ZooZooMama,and it becomes famous at the school. Everybody crowds around Rowly and Greg feels left out.

Greg signs up for the wrestling team. When he is wretling he gets beat up by a girl. A photographer takes a picture of Greg getting beat up by her. Greg is upset about the picture and tries to find the photographer. He finds her hiding underneath the benches. Greg tells her not to publish the picture, but she does it anyway. When everyone sees the picture, they pick on him even more.

This story relates to my life because all the kids play video games all night at their friend's houses and so do I. The pictures in the book help tell the story because you can see all the funny things the characters are doing. I think people should read this book because it is very funn and tells about life from a kid's perspective.

Carson A.
is a student in
Mrs. Okamura's 5th Grade Class