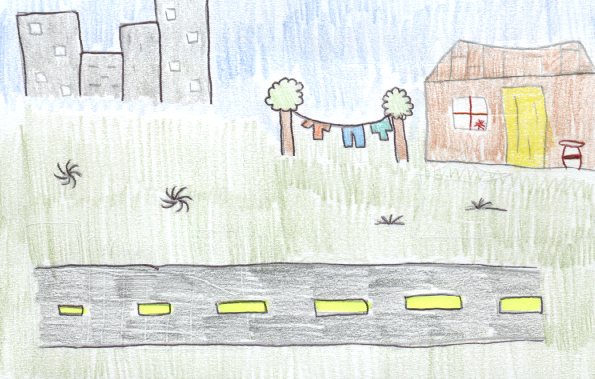 Once upon a time there was a poor little boy named Charlie,who lived in an old wooden house in a great town. He never expected any thing great to happen to him. He was very poor and his family couldn't afford beds. The only bed in the house was for his grandparents from his dad's side, Grandpa Joe and Grandma Josephine, and from his mom's side, Grandma Georgina and Grandpa George. They all shared one bed, while Charlie and his parents, Mr. and Mrs. Bucket, slept on the floor.

Charlie got a Wonka Bar for his birthday from his parents and shared it with his whole family. Wonka Bars were known as the world's finest chocolate, but no one knew who the workers were for the Wonka factory because according to his Grandpa Joe, who used to work in the factory, one of the workers started to send the recipes of Wonka's creations to other agencies. So Mr. Wonka had to fire all of the workers and said the factory would be shut down forever. But now, new workers had been hired and no one knew who the workers are.

When Charlie came home, he turned on the T.V. and saw Willy Wonka, who said that he was sending out five golden tickets under the wrappers of the Wonka Bars to five lucky children who would get a tour of Willy Wonka's factory. The lucky winner would also get to keep the entire factory, from none other than the actual Willy Wonka.

Charlie won a ticket as did some other kids. They went on an exciting adventure at the factory and met the new workers who were tiny people that looked scary, but were very loyal to Mr. Wonka. Charlie proved to be the most honest of all the kids who won tickets and Mr. Wonka gave the factory to him.

This is a great story and nothing needs to be changed in it. My favorite part is when everyone is at the Sweet Factory because that's where the chocolate is made. Charlie is my favorite character because he is very humble and cares about other people. My least favorite character is Veruca because she is a spolied brat.

I like this story because my life is an adventure, just like Charlie's. There are many pictures in the story that help show what's going on. I think others should read this story becasue it is exciting and makes you wish you were having the same adventure.