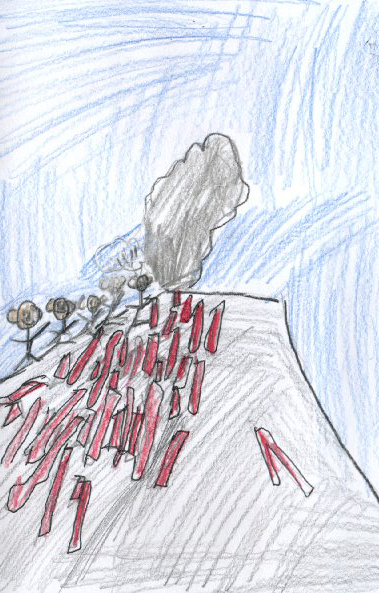 Amy Cahill's grandmother, Grace Cahill, laid down a challenge to every branch of the Cahill family who joined the race for the 39 Clues. The winner would walk away with one million dollars or become the most powerful person in the world. They knew that their grandmother wanted them to win. They were supposed to meet at the underground transportation. As soon as their plane from Moscow had touched down,Dan, Amy,and Nellie Gomez split up. Dan spotted a splash of red in the middle of some bushes and came over very quickly.

He pulled out the red suitcase the old lady had carried. Dan flipped it open and it was empty. Dan looked up at the building and Amy collapsed in front of it. They paid admission and Dan paused at a wall ined up with criminals from the 1890's. Amy saw an elgant woman in green suede shoes move forward to examine the mug shots. Amy followed her when she moved down the hall, but then the woman disappeared.

Amy broke into the school one night. The assistant principal turned out to be an alien who turned into an eleven foot tall thing with eight arms that played for the Boston Celtics. Amy found a newspaper from 1951 that was left behind by Fossie. Amy and Dan told Alistar what they did in Australia. Madrigals destroeyed evidence in a raid and kept a copy for safe keeping. They started on the hunt for the 39 clues for Grace's sake.

This story is interesting, but has nothing to do with my life because I don't like to look for clues. There aren't any pictures to help tell the story, but I wish there were. I think you should read this story because it has an exciting mystery that keeps you in suspense until the very end.

Zachary A.
is a student in
Mrs. Okamura's 5th Grade Class