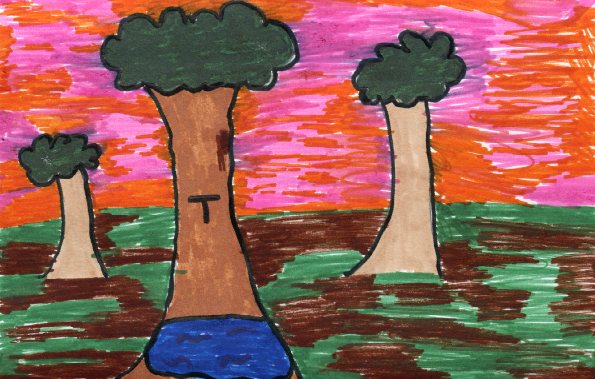 During the first week of August, Mae Tuck would be seeing her boys, Jesse and Miles Tuck. Mae's husband, Tuck ,asleep did not care much. Since Tuck was listening, Mae told her husband she was going to Treegap to see the boys .Winnie Foster was sitting behind the gates of her house. She was sitting on the green grass with a frog. She told the frog that she was going to run away tomorrow. That night, Winnie was outside trying to catch fireflies and didn't notice the man in a yellow suite at first. But then the man started to ask lots of questions and Winnie's grandma came and took her inside.

Early the next morning,Winnie rab away far into the woods. While there she saw a boy near a tree and he drank from a spring. The boy askes why she is in the woods and she told him that this was her home. The boy,Jesse Tuck,"he said for her to go home. Winnie said she wanted a drink of water first, but Jesse told her not to drink it. .Then Jesse saw his ma and his brother, Miles. Mae grabbed Winnie and Winnie was being kidnapped. Mae, Jesse,and Miles told Winnie not to be alarmed. Then Winnie met the king of the house, Tuck.They explained that everyone drank from the spring except for the cat, Tuck, Mae, Miles, Jesse, and the horse and they all had everlasting life. The Tucks asked Winnie not to tell anyone about the spring.

Winnie's parents had noticed she has been gone for a while. Then the man with the yellow suite made a deal. If he told the Fosters where Winnie was, they would have to give him the forest. He told them that Winnie had been kidnapped by the Tucks and he would get her from them. When he got to the Tucks house Winnie was with Jesse and he was goig to kill Jesse, so Mae hit him in the back of the head with a gun and killed him. A constable saw what she had done and announced she'd be hanged.

Winnie knew that if Mae was hung everyone would find out that the Tucks had everlasing life. Winnie said that she would take Mae's place and they should stay far away for a long time. The constable found out it Winnie had switched places with Mae when it was time for her to be hung. Winnie was let go. The Tucks never saw her again until they visited her gravestone.

This story does relate to my life because if someone who I cared about was in trouble, then I would try to protect them in anyway possible. This story does not have pictures, but even if it did it still wouldn't have helped explain the story any better.I think others should read this story beacause it a great book and has a very interesting plot.

Aly A.
is a student in
Mrs. Okamura's 5th Grade Class