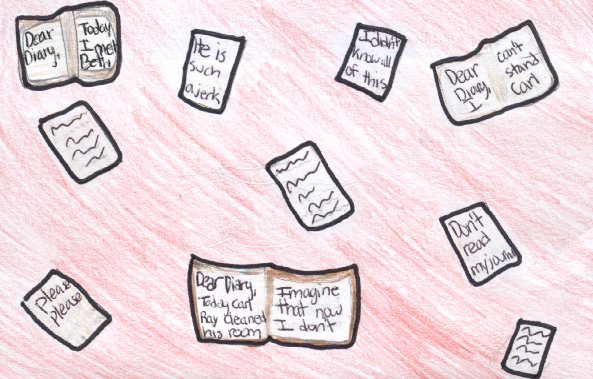 Mary Lou Finney has to keep a journal over the summer. When she goes back to school, she has to turn it in to her new English teacher. She isn't looking forward to it, but ends up using more than one journal! Her cousin, Carl Ray, comes to stay with her big family. Her family includes her mom, Sally Finney, her dad, Sam Finney, Maggie, her 17 year old sister, and her brothers Dennis(12), Dougie(8), and Tommy who is four.

Carl Ray is very quiet and says he is trying to get a job. He comes to find work but meets his real father and ends up working in his father's hardware store. It turns out his father is the Finney's next door neighbor as well! But before Carl Ray gets to tell Mr.Furtz that he is his son, Mr.Furtz gets sick and goes to the hospital. The Finneys and Carl Ray are at the hospital when Mr.Furtz has a heart attack and dies. Carl Ray is heartbroken, but doesn't tell anybody that he is his father. While he is busy, Mary Lou is fighting with her best friend, Beth Anne. She is dating a bad person and Mary Lou is telling her that. But Beth Anne doesn't believe her and she says he is great. Mary Lou is also dating Alex Cheevy. She is really happy with him and ends up dating him all summer. She also goes up to Carl Ray's house and gets spooked by a scary story.

Beth Anne breaks up with her boyfriend and makes up with Mary Lou. Then she starts dating Carl Ray! Mary Lou also takes her brothers to the pool and does chores with Maggie. The Finney's find out that Mr.Furtz was Carl Ray's father and feel bad. Mary Lou has a very dramatic summer and doesn't want her new new teacher to read her journal.

I wouldn't have changed anything in the story because I liked every part of the book. It is my favorite book. The best part of the story is when Mary Lou goes up to Carl Ray's house because a lot of funny things happen. My favorite character is Carl Ray because so much happens to him, he still ends up being a good and happy person. My least favorite character is Mary Lou's best friend becasue she is too dramatic.

This story relates to my life because I have a lot of things going on in the summer and I see my family a lot. There aren't any pictures in the book, but I don't think it needs them. I think others should read this story because it's funny, adventurous, sad, suspicious, and really good!

Dalaney B.
is a student in
Mrs. Okamura's 5th Grade Class