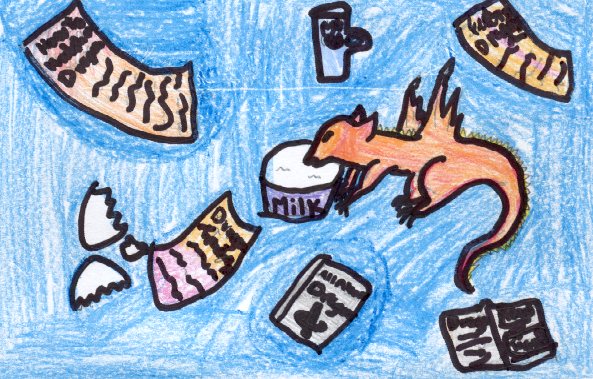 Jeremy Thatcher was running from the bullies, Morton and Freddy. He stopped at an old fashioned shop. He knew his entire neighborhood, but he didn't know where he was. The shop he stopped at was called Elves' Magic Supplies S.H. Elives, Prop. He entered the shop. It was dark and mysterious. Then he saw a man. His name was Mr. Elvis. Jeremy met him and he looked around for something to buy. He saw a beautiful ever changing sphere. He asked to buy it. Then, he was somehow transported back to his house with the sphere inside a box. It also came with a paper.

He went to his room, without disturbing his pets, and unrolled the paper. It said How to Hatch a Dragon's Egg and under it, it had instructions. He read the instructions and did what it said. That night his egg hatched and out came a baby dragon.

Jeremy named the dragon, Tiamat, with the help of Mrs. Preist who also knew Mr. Elvis. She told him that every decade a person could shop at the magic store. As Tiamat grew Jeremy received more instructions magiclly and he cared more for his dragon. Soon, Tiamat went to school with Jeremy, but only Mary Lou and Jeremy could see Tiamat for a weird reason. Eventually, Tiamat learned to breath fire while flying, but it only went so far. Once she gave Mr. Kraviz, the art teacher who is mean to Jeremy, a hotfoot! At night, sometimes Jeremy would ride on Tiamat's back while flying without being seen. Then, one day he got a letter from Mr. Elvis saying that Tiamat had to go to her own world.

Jeremy grabbed all the teeth Tiamat lost, eggshells, and the old skin and brought it to Mrs. Preist. They transported it all to Mr. Elvis's shop. Mr. Elvis told Jeremy that Tiamat needed to go to her real dragon world. Jeremy was extremely sad that Tiamat had to go to her real world, but they could still communicate by putting pictures in their head. Jeremy would never forget Tiamat.

This story does not relate to my life because it's a fariy tale. This story has pictures. They don't help as much as I thought because I can form images in my mind. I think others should read this story because it's very interesting book that really sticks to your mind. Overall, it is an enjoyable book to read.