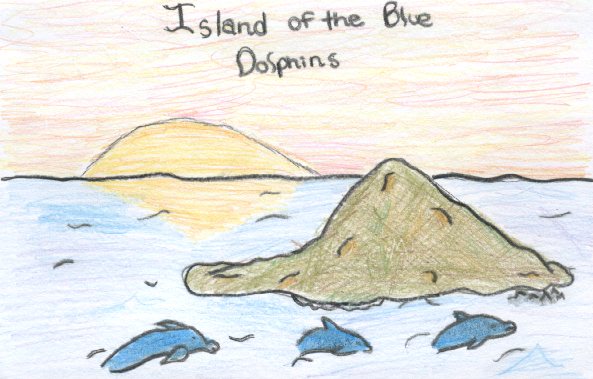 On a small island, there's a little village full of adventure. The king died in war, and the queen died before him from a different cause. They had a daughter, Karana, and a son, Ramo. In this story Karana and Ramo get left behind when the village had to leave to go to a new island. Karana was on the boat, but Ramo was still on the island looking for his spear. Karana jumped off the boat, leaving behind her family and fortunes. Now, Karana and Ramo had no weapons or shelter.

One day, Karana woke up with no one beside her. Ramo was missing! She searched the whole island leaving out one place. She found Ramo laying on the floor cold. He had been killed by a pack of wild dogs that always searched for food and ate whatever they caught. Karana couldn't sleep that night. Now it was just her and the wild.

Karana made a house, tools, and food. When she was looking for water, she saw the creature that killed Ramo. It took Karana one hit to take him down. She used the bow and arrow that she had made. When she saw the dog in pain, she pulled the arrow out of it's leg. From that day forward, "Rontu" and Karana were great friends.

When the Aleuts came to the village, Karana burnt her house so they wouldn't know a girl was living on the island. But it wasn't the Aleuts; it was realy a ship that was looking for her! The men on the ship said her whole village died when they got to the island. They hit rocks that were on the shore. Karana was the last person to carry on the same customs and keep the tribe alive. Karana was devistated, but she had to move on.

I would not change anything in this story because this book is a true story and you can't change what happens in life. My favorite part of the story is when she hits Rontu, but then she takes the arrow out of his leg and they then become friends. My favorite character is Rontu becuase he is a dog that will help you if anything goes wrong. I did not like the person who killed Karana's father because her father didn't do anything wrong.

This story relates to my life because when I was toilet papering, I got left behind and I was with two friends. We got in big trouble because we got caught. I think people should read this story becuase it shows you about survival and bravery.