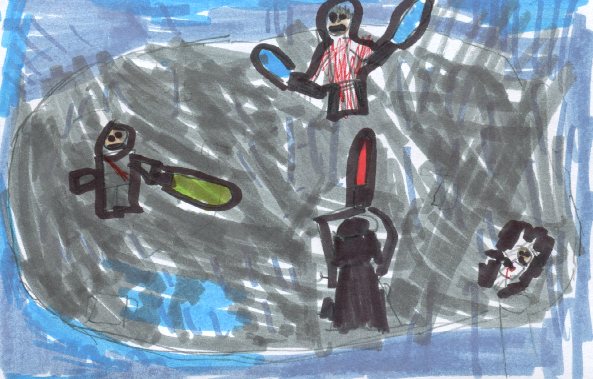 In the story Star Wars: The Force Unleashed 2, the main character, Starkiller, is on the planet Kamino in the platform city of Topa. He is in a pit like a prisoner and the only thing he can hear is rain. On Kamino it never stops raining. Darth Vader is telling him that he is a clone when he is not. Vader is doing this so he can turn Starkiller back to his tool again. Starkiller has a vision and then Vader tells him that the cloning process is still not perfect. Having had enough, Starkiller hears a voice in his head by the name Jouno Eclipse. This name has been running through Starkiller's head and he sees thirty people walking who seem mindless and Vader starts killing all of them. Starkiller turns and looks at Vader, and using the power he has, he quickly pulls up his head and shoots out lightning. Starkiller runs and ignites his light saber as he goes on the wet platform. A Voes comes on to stop anyone from that knows what's going on there. Knowing that Vader is following, Starkiller is forced to fight the stormtroopers. When the Squade is dead, Starkiller sees Vader and gets inside and leaves Komino in a stolen ship.

Starkiller goes out to find his old freind and Rahm Kota is now a prisoner on the planet Cato Neimoida. When Starkiller gets there, he finds otu that Kota is in a big pit and frees him. Then they find out htat Jano was taken to the planet Kemono and Starkiller goes there to free him.

When Starkiller and Kota get to Kamono, they call the rebel alliances and attack the heart of the empire. When Starkiller is on the platform, he sees Juno who is being held by Vader. Starkiller jumps up over Vader and loses his second light saber. After freeing Juno, the rebels capture Vader. At the end of the story, Starkiller finds out that he is not a clone.

This story doesn't relate to my life but I love it anyway. There aren't any pictures, but I wish there were. I think others should read this story because it has a great plot and it is exciting and unpredictable.

Sammy.F
is a student in
Mrs. Okamura's 5th Grade Class