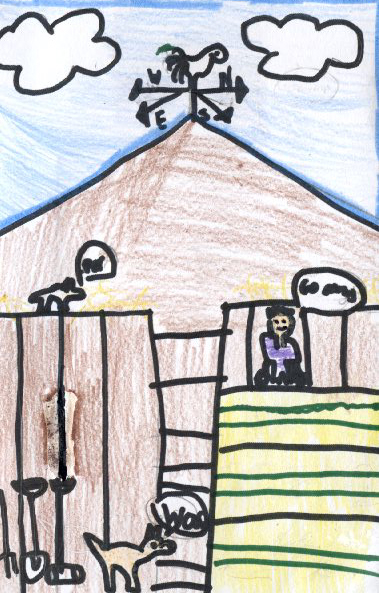 There is a stray dog that runs around Billy's dad's farm. Billy does not like dogs because of a tragedy he had with a dog when he was young. This dog is brown and shaggy and really thin. He tries to keep his mind off the dog because he feels really bad for him. Billy wants to feed him because he feels bad for him, but is afraid he'll bite.

Billy ends up falling for the dog. He names him Kitty. One day Billy and Kitty were looking for a cow that went into hiding to give birth to a calf. After not finding the cow, he heads home. On his way home, he runs into a pack of wild dogs. He and Kitty are attacked and have several wounds. His mama calls the vet and the doctor. Billy and Kitty are both given shots for pain. After the shots Billy feels very drowsy. His mama says it is because one of the shots. He falls asleep on the couch.

He is fine the next day and so is the dog. His mama says he can have a friend over. When his friend comes over they went to see his oil rig. When they get there, a load of pipes is on its way in. The back of the pickup truck breaks and under it is Kitty who gets smashed to death. Billy runs home with Kitty in his arms. Later Kitty is buried on a hill.

This story relates to my life because I once had a dog when I was little. His name was Chance adnd he got hit by a car and died. There aren't any pictures in this story. I think others should read it because even though it is sad, it makes you feel good.