The Pot that Juan Built

The Pot that Juan Built 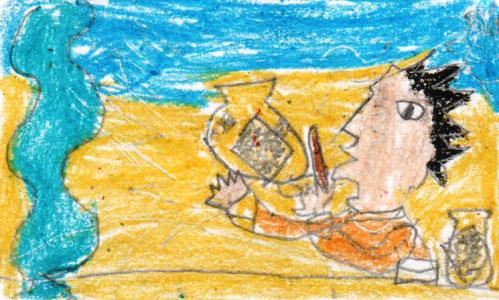 Juan was a poor man who built pots to sell so that he could buy food and become rich. In order to make the pots, Juan needed to find dough, paints, a brush, and hair for the brush. He found the dough from the mountain, he cut his hair to use for the brush, he made a brush from dead animal bones, and he made paint from melted rocks. Juan then started making pots, but he had a hard time doing it because he did not have a spinning machine to roll the pot with. So, he ended up using his hand. Juan made lots and lots of pots, and began to sell them by his house. To find out whether or not Juan got rich, read "The Pot That Juan Built."

We enjoyed this book, because it taught about Juan's work and where it ended up. Our favorite part was when Juan picked up cow manure to build pots with, because it was very funny. The illustrations in this book were perfect because they showed a lot of details and they were very colorful.

CA and AS
are students in
Mr. Fulton's 2nd Grade Class