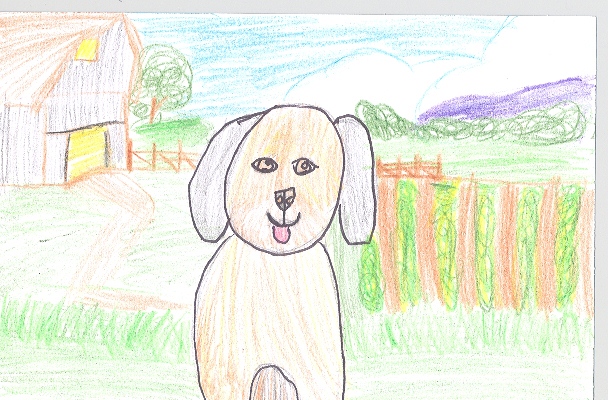 Are you scared of dogs? That’s how a boy named Ricky felt until he met Kitty. Ricky is a young boy who lives on a farm. When he was young a pack of stray dogs attacked him. From that moment on, Ricky feared dogs. This book is about Kitty, a stray brown puppy that helps Ricky overcome this fear. One day Ricky was stacking hay when he saw something move. Ricky lifted the hay, and there laying down and whimpering, was a tiny, skinny puppy with sad, brown eyes. Although Ricky felt bad for Kitty he still wanted him gone. So Ricky feeds him. Once Kitty has enough strength Ricky will get rid of him. But, he never does! During the story, Ricky starts to become fond of Kitty, and seems to enjoy spending time with him. He becomes fond of Kitty when feeding him. Kitty starts to play with him and Ricky likes it. Ricky even becomes brave enough to hand feed Kitty! Ricky has a lot of fun with Kitty, but he never tells anyone about him. What will his parents think? Read the book to find out how this twisted relationship abruptly ends!

I liked this book because it was touching. As the story evolves Ricky changes and realizes that dogs can be man’s best friend. Although Kitty looks sad and lonely, I really like the cover illustration, because the farm looks serene and peaceful. My favorite part was when Ricky starts falling in love with Kitty. I was amazed that a small dog could change a frightened boy into a confident and caring one.

I recommend this book to anyone who likes fiction books, dog books, touching books, and sad books. And oh! I almost forgot! This book is so good that it won three state book awards!