The Life of Pi

The Life of Pi 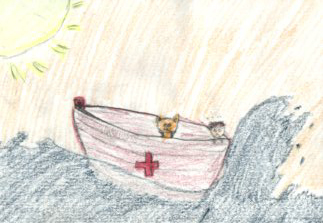 Do you want to read an adventure? Try out The Life of Pi. This story is a story about a sixteen-year old boy named Pi Patel who is stuck on a lifeboat in the vast Pacific Ocean with a Bengal tiger to keep him company. Pi Patel experiences many obstacles: Battling for food, shelter, and surviving disasters. But he ends up bonding with the tiger and grows closer to the ocean.

A unique book like this deserves a true reader to enjoy it. My favorite part of the story was when the tiger, named Richard Parker, used his power to help Pi overcome many foes he had to face in the sea. One of these, was a shark that they encountered. It was a gory battle, but together they were able to terminate it.

The plot seems unimaginable because I have never heard of anyone that had to survive on a lifeboat with a tiger. But the writer brings the story to life and it becomes real. I was able to identify with Pi and his struggles. It was like I was there on the boat with them.

I would recommend this book to anyone who likes reading about danger and survival. A reader who has a good imagination would be guaranteed to enjoy the life of Pi Patel. He would impress you by how he survives living on the huge ocean.

Albert B.
is a student in
Mrs. Ferguson's 3rd-6th Grade Class