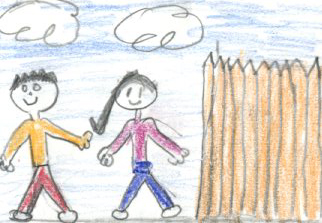 This book is about how two kids host two major Egyptian gods and try to overcome difficulties of sending a bad god, named Set, into exile. Set is trying to conquer the world with an army of demons. Unless the characters Carter and Sadie resolve their differences they will not be able to destroy the evil gods fountain of power and send him into the Duat. Carter and Sadie can host gods because they are blood relatives of the pharaohs, the most powerful magicians of all time.

My favorite part of the book is when Carter overcomes his fears and defeats the god, Set, with his magical eagle warrior. Carter changes from wimpy and fearful to confident and fearless.

This book is like the other series, Percie Jackson and the Olympians. I enjoy reading the books written by Rick Riordan because he makes kids have magical powers.

I recommend this book because of all the adventure involving gods and goddesses. The readers who like these books are adventurous people and like leaning about gods. Also, I think the readers would like the character Carter because he evolves into a confident and fearless kid.

Luis A.
is a student in
Mrs. Ferguson's 3rd-6th Grade Class