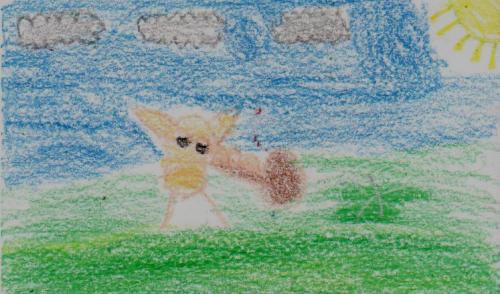 Have you ever seen a pig build a house? This is a book where a pig builds a house, and there is a wolf that tries to eat the pigs. The first pig builds a house made of straw, the second pig makes his out of sticks, and the third pig builds a brick house. The wolf blows the first two houses down, but he can't blow down the brick house. This was a good book because it can teach you how to build a house. Another lesson that you can learn is to always take your time in building a house so that it is strong and does not get destroyed. An unusual part of this story is that the pigs and the wolf could talk, which is not true in real life. Read this book to find out if the big bad wolf can blow the house down.

I like this book because it teaches you important things, like you should not get close to a wolf. My favorite part of the book was when the pigs ran as fast as they could, because their faces got all red. The illustrations were good because they showed things that are in real life, such as grass, trees, and clouds.

JA
is a student in
Mr. Fulton's 2nd Grade Class