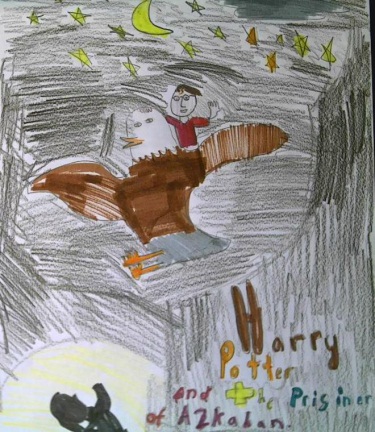 The book is about a boy named Harry who hears about a murderer who turns out to have not murdererd people and to be Harry’s godfather. A big idea is that everyone thinks the murderer wants to kill Harry because he keeps breaking into Hogwarts. But, Harry’s friend, Ron, has a rat that used to be a person, the rat tried to kill other people when it was a human. The person that didn’t murder was named Sirius Black so Sirius wants to kill the rat because the rat tried to kill him.

I LOVE the book! Because I love magic and this book has a lot of magic in it. Also, I like exciting and all-of-a-sudden things.

My favorite character was Harry because he is the main character and he was involved with a lot of action.

This book is just like some of the other Harry Potter books because most of the characters are the same.

I would recommend this book to my cousin Mike, because he loves Harry Potter books and he read the first book and half of the second one at my house so I’m sure he would like the third book .