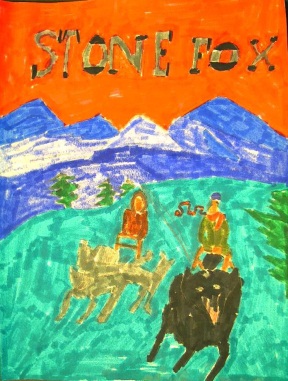 I read the book Stone Fox by John Reynolds Gardiner. The main characters are Little Willy, grandfather and Stone Fox.

Little Willy is a boy who is 10 years old. Little Willy lives on a potato farm with his grandfather and a dog named Searchlight. Grandfather is often playful and he is responsible for Little Willy. Stone Fox is a really big indian with beautiful Samoyeds for sled dogs. Everyone thinks Stone Fox is really mean and quiet.

I really liked the book Stone Fox. It was my second favorite book I have read. I like it because Little Willy is very brave because he entered a sled dog race for adults.

My favorite character in this book was Little Willy because he was very nice and took really good care of Searchlight, his dog.

My favorite part of this book was when Little Willy entered the sled dog race. I think that was really brave of Little Willy.

I recommend this book to kids in 2nd-6th grade because it is a great book to read!