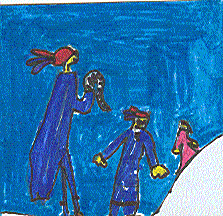 I liked Revolutionary War on Wednesday. A good part was when George Washington read a poem. That was my favorite part because when the soldiers heard the poem it made them want to fight. I liked when one of the soldiers wrote the poem for his kids, too. The illustrations were good. They had lots of details in them, and they matched the story. I felt happy when I read this book because I liked that the soldiers didn’t give up.