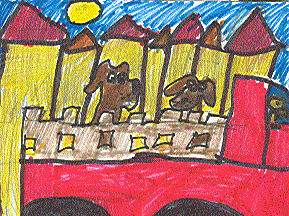 Once there was a big, brown cow dog named Hank. There was another medium dog, and he and Hank were friends. One day Hank and his friend saw some tracks, and they each thought the tracks were different kinds. Hank followed the tracks and jumped behind a bush to get the animals. It was a porcupine! So a man had to pull the porcupine needles out.

I liked this book because it was a funny book, and I like to read funny books. I think the pictures in the book were good because they showed lots of details and made me want to read more of the story. I liked Hank, too, in the story. I liked Hank because he was funny. My favorite part of the story was when Hank jumped on the porcupine. It was very amusing and it made me laugh. This is the first Hank the Cow Dog book I’ve read. I might read another one, but I’m not sure.

I recommend this book because I think it’s a good book - it is a funny book, and it made me kind of laugh. Hey, Matthew, I think you’ll like this book because it is funny and it has dogs. I think you’ll like the part where a dog jumped on the porcupine. It was funny when it happened and it was funny when a man had to pull the needles out. Some got in his nose!