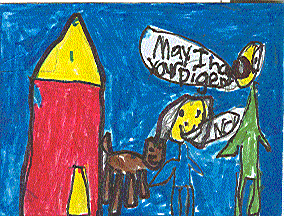 My book was about a girl named Pam, and she had the best homing pigeons. A man named Arminger wanted to buy her pigeons, but Pam said no. When she got home her pigeons were gone. She thought Arminger had stolen them, then she thought that Henry, a boy from school, had stolen them Arminger did not really steal the pigeons; he helped her finally figure out who really did take the pigeons.

I like the book The Night Flyers because it’s about World War1. I really like learning about wars. My favorite part of the book was when Pam sneaked to Arminger’s house because I like to be sneaky. I like the illustration because they’re black and white.