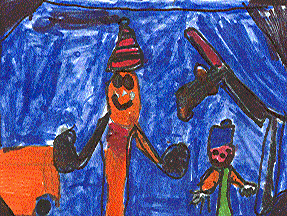 In this book Jack and Annie go to New York City in 1891 to save a special pony. The Magic Tree House took them there. It was winter and it was freezing! They had lots of adventures. They even met a unicorn and rode a subway to the zoo!

I liked this book because Jack and Annie saved a trapped pony and turned the bad people into ducks. At the end of the mission Jack and Annie got a magic wand that was shaped like the unicorn’s horn. That was my favorite part. Jack and Annie are my favorite characters because they are passionate and dependable. Jack kind of reminds me of me because he gets up early and so do I. I recommend this book because I think it’s a good book. I like the way things spin and spin for time travel. I think Samuel would like to read this because he likes unicorns. He would like it because it’s cool. He would like the part where first it spins and spins then everything is absolutely still.