Reviewed by Harrison B. (age 8) 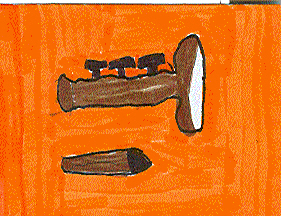 John’s mom and dad always told not eat too much candy One day John ate too much chocolate and they had to go too the doctor. When the doctor checked John’s reflexes, he kicked the tool out of doctor’s hand. One day after school John found a coin. Then John bought a piece of candy at the candy store and ate it. After that everything he touched – including his mother - turned to chocolate.

I think this book is cool because everything John touches turns to chocolate. I think that is funny and kind of interesting. My favorite part was when John turned his mom into chocolate. My favorite character was John because he is funny. There was a character that changed to chocolate and was the mom. She got to change back. John met the magician and started back to his house.

Harrison B.
is a student in
Ms. G.'s 2nd Grade Class