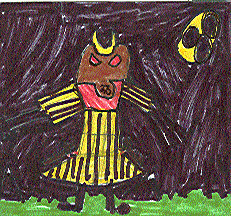 Jack and Annie went to the Frog Creek woods to see if Morgan Le Fay was there. They found a note from Morgan Le Fay; it said that they had to find four things to help them break a spell. The magic tree house took them to the time of the ninjas. They met two ninjas, and Jack and Annie asked the ninjas to help them. Together they found one of the four things to break the spell.