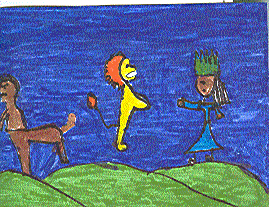 The story is about four children from London who go to a kind old professor because of the war. Lucy (who is the youngest) goes into a magical world called Narnia where she meets a nice faun who works for the white witch who’s turning Narnia to winter - never Christmas. When Peter, Susan, and Edmund discover Narnia, Peter and Susan go to the beavers’ house, but Edmund goes to the witch’s house. Lucy, Peter, Susan, and Mr. and Mrs. Beaver go to the stone table to meet Aslan, the great lion. Aslan sacrifices himself for Edmund and goes back to life because the stone table broke, and he kills the white witch.

I think the book was very magical and wonderful. My favorite part was when Lucy discovers Narnia because that is where the adventure begins. My favorite character is Lucy. Aslan reminded me of my cat, Mercy, because she is always like a ruler. Edmund changed his behavior after the battle because he realized he wanted to be with Aslan, not the white witch. I think the illustrations were magical. It made me feel good and scared.