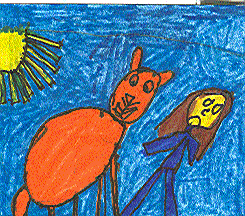 At the beginning World War II was going on, and the children were sent to the professor’s house in the country to be safe. When they were hiding from the housekeeper in the wardrobe, they found Narnia. Lucy was the first one to find it. At first the other children did not believe her stories about Narnia. Together the children fought with Aslan against the White Witch. Aslan won, and the children became Kings and Queens of Narnia.

My opinion is that The Lion, The Witch, and The Wardrobe is a good book. I liked it because I liked the story. My favorite part was when Aslan was fighting the witch because I didn’t know who was going to win. Aslan was my favorite character because he was the one who made Narnia good again. The book was challenging because some of the words were hard and it had seventeen chapters. I would recommend this book to older kids because some parts of the story were hard to understand. I think fifth grade would be a good grade to read this because they would know the hard words and the hard parts. I think the part they would like best was where Aslan was fighting the witch. The wouldn’t know who would win.

Ashley B.
is a student in
Ms. G.'s 2nd Grade Class