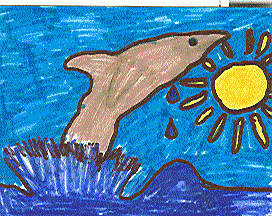 Spinner dolphins are my favorite kind of dolphin so that’s why I liked this book. My favorite thing about spinner dolphins is that when they jump, they spin in the air. The book has a picture of a spinning dolphin; it was really good picture. My favorite thing about this book was the interesting facts. It tells about dolphins. This book reminds me of another book called Whales because that book has facts and details about whales like this book does about dolphins.

This book Dolphins is great! It tells about many different dolphins. I recommend this book. I think my best friend downtown would like the book. The reason he might want to read this book is because it has so many facts, such as a life cycle of a dolphin. This book is good for YOU!!!!! I think he’d like Spinner Dolphins the best because they are very active.