Reviewed by Kevin B (age 8) 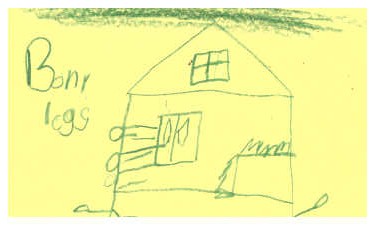 There was a horrible bad witch called Bony Legs. She ran fast on her bony legs. Her teeth were made of iron. She liked to eat children because she’s a witch. She lived deep in the woods in a hut that stood on chicken feet. All day long she waited for children to pass by. There was a little girl named Sasha. Sasha’s aunt sent her out to borrow a needle and thread. Sasha took some bread and butter and some meat for lunch. When she came to the hut that stood on chicken feet, she scraped the butter on the hinges of the gate so that it would open quietly.

When she went inside, she found a dog who was barking and she took some bread and gave it to the dog to eat. Then she found a cat and she put some meat for the cat to eat. Sasha went inside the house where the witch lived and Bony Legs sent her to go into the tub because the witch wanted her to be clean because she wanted to eat her. Sasha was scared and began to cry because the witch would not let her go. “Don’t cry,” said a voice, “I will help you.” It was the cat. The cat told her to fill the tub but don’t get in. Sasha did what the cat said. Then the cat gave Sasha a silver mirror and told her to throw the mirror away when she was in trouble. Sasha climbed out the window and began to run. She meets the dog who gives her a comb. Sasha ran into the woods.

Bony Legs went to see if she was washing and the cat said she was. The witch yelled at the cat for tricking her. Then she yelled at the dog and the gate for tricking her too. She pinched her nose and ran after Sasha. Sasha was scared and threw the mirror away. The mirror a lake and the witch could not cross away. Then Sasha throws the comb away and the combs a forest. The witch couldn’t find her and Sasha went home.

I liked the book because it was scary. It was scary because Bony Legs was going to eat the girl. The cat and the dog helped her too and the gate also helped her. My favorite characters were the dog and the cat because they helped her to escape from the house. My least favorite was Bony Legs because she was mad and she was chasing Sasha. I felt scared because Bony Legs would eat her. What I didn’t like about the book was it was scary. I would recommend the book to my friends because it is scary and they like scary books.