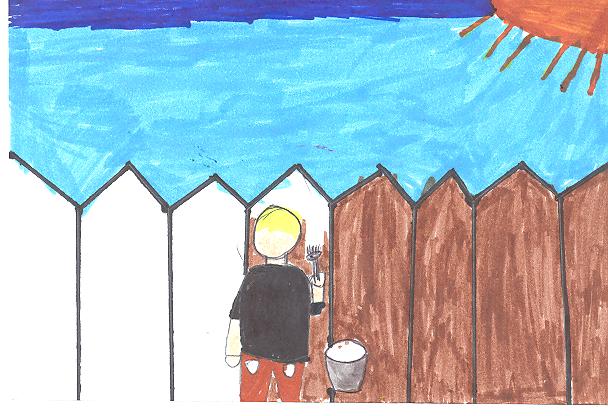 This book is about one boy whose name is Tom. Tom was a very difficult boy; he never listens to his parents. But he doesn’t have mother and father. He lives with his aunt and little brother. Once he did something wrong and his aunt make him to paint the fence. After he started painting the fence few minutes later his friend comes and asks: what are you doing. Tom answered: nothing, just a very important job and if I miss one little bullet out of this fence my aunt will kill me. I’ll give whole apple for that jib: said boy. Tom couldn’t stand anymore and took the apple. Tom set on the rock and was watching how his friend was working and doing his job. And Tom was eating the apple watching the sky. Once Tom and his few friends ran away from there parents, took some food and ran into the forest. They decided to be pirates. They were pirates for 1-2 months. Than after few weeks they all went except Tom and his best friend Huckleberry. And one or two weeks later they both found 6 thousand dollars. They went back to there homes. Tom was getting 1 dollar each week. He didn’t know where to spend money.

My opinion is that this book is very interesting as it is full of adventures. When you start reading it you can’t stop. I like the story because I am the same age as Tom and I can relate to his thoughts and feelings. My parents sometimes annoy me and sometimes feel like running away. Some parts of the book were very funny too like when Tom was fighting with his little brother.

I recommend this book to every type of readers. Because when you start to read it then after while it’s doesn’t matter what type of book is it. You will like it. I think you will like it.

Zurab B.
is a student in
Ms. Greenall's 6th Grade Class