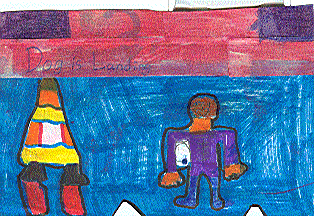 This book is about a dog named Max who goes to Mars. Tori, the owner of Max, is sad because the trip is going to take almost a year. Every day before Tori goes to school she gets a private videophone call from the astronauts who Max is with. During one of the calls Mars Commander Grant pointed his camera out the window and showed Tori the Earth and Moon in the distance. At every stop the crew collected rocks, and the astronauts learned a lot about the history of Mars. I like this book because it is a cool book. My favorite actor was Commander Grand because he pointed his camera out the window when he said, “Those two planets in the distance are earth and moon.” There were illustrations in the book. They went along with the story and helped me understand the story. I would recommend this book because of all the facts about Mars. I would recommend Max Goes to Mars to my cousin because he likes dogs and he likes planets. I think he will like this book. I think every body would like the part when Max does his merry-go-round super trick.