The Mystery of the Big Paw Print

The Mystery of the Big Paw Print

Illustrated by Michael A. Aspengren 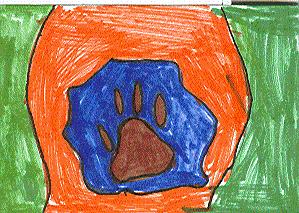 There was a club of boys who’s names were, Abe , Gabe , Toby , and Ty. One night while Abe was still awake, he saw a HUGE animal run by his window! The next day Abe and his friends tried to figure out what the animal could have been. They thought and thought and said it was a tiger loose from the zoo. The next night Abe saw the animal again and called the zoo, but they said no big animals had escaped. In the morning, they figured out that the animal they saw was their other friend’s dog. I liked this story because it has some details and it is very mysterious. I like the part when they found the paw print because that part was kind of cool! I think I like all of the characters because they were all great! They were all great because they all worked together as a team to solve the mystery. All the characters changed because when they changed their minds and realized that the tiger was really a dog, they weren’t afraid any more. I liked the illustrations because they matched what the story said. This book is part of a series called the Kooties Club. They are all mysteries. I think I’d like to read another book in this series. I would recommend this book because it is really adventurous and it has a really cool mystery. I think my friend Cassidy would like it because she likes mysteries. I think people would like the part when the lady that was jogging fell in the hole they made to trap the big animal because it was very funny to me!

Hannah B.
is a student in
Ms. G.'s 2nd Grade Class