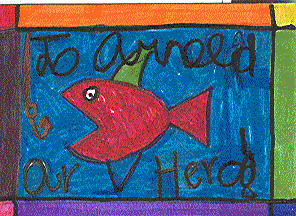 Mrs. Frizzle told her class that they were going to study sea animals. Some of the students had a hard time deciding on a topic, so they all went to the aquarium. When they got there, the aquarium had flooded! The Magic School Bus took Mrs. Frizzle and her class to the ocean. They learned about all different species of sharks, and they had adventures with some of the sharks. This book was so cool! I felt I was in the adventure. Arnold was my favorite character. He was totally unique in the story. Instead of him being scared when everybody but him got sick on the bus, he was the hero because he took charge and even saved them from a shark. The book is in a series that I like . . . The Magic School Bus; in fact, I’m reading the other books. I recommend this book because it’s really interesting and funny. I think my mom would like it because she likes to learn. I think she’d like the part where they go to the ocean because they learn about species of sharks there.

Alicia A.
is a student in
Ms. G.'s 2nd Grade Class