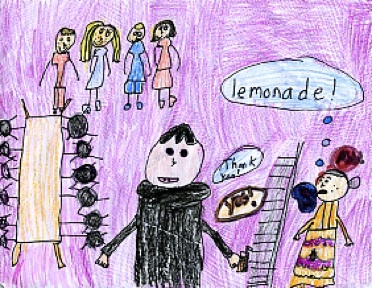 This is a story about four kids called the Bailey School Kids who think their new school counselor is Count Dracula. His real name was Drake. There were a lot of things about Drake that reminded the kids of Count Dracula. Counselor Drake was pale, had teeth like fangs, and he spent a lot of time in the dark. They also thought he was weird because he only drank pink lemonade. Even though counselor Drake looks scary, he seems to have a nice side to him. For example, he breaks up a fight between two kids and makes them get along. What does counselor Drake do to the children? You have to read and find out!

My favorite part was when one of the kids, Howie, was so scared that he wore a scarf around his neck the whole day. I thought this was funny because it was a warm spring day. Howie also reminds me of my brother because he is always scared. This book taught me to never judge people by the way they look. We should always look at people from the inside. I thought the illustrations were good because they show a lot of details and helped me understand the book. The illustrator drew some great pictures of Count Dracula. This book is part of the Bailey School Kids series and they are all mystery books. The Bailey School Kids are the same four kids, but the mysteries are all different and fun to read.

Jenna B.
is a student in
Mrs. Nihart's 2nd Grade Class