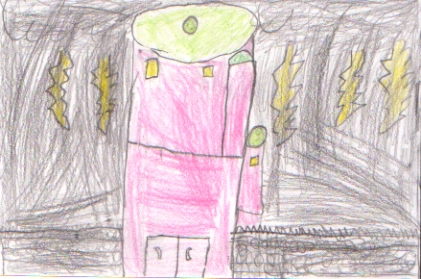 I like this book because it has a lot of mystery. Skipper doesn’t know whether he can trust his new friend. Libby is a 12 year old girl who likes to read a comic book called Harry and Beanhead. When they go into the basement to explore, Skipper is sure that she is right behind him. Somehow she disappears. I like The Masked Mutant because he was tricky and mysterious. He is a shape-shifter, a mastermind criminal, and a thief. He traps the Galloping Gazelle, a super-hero who has super fast speed.

This book is part of the GOOSEBUMPS series written by R.L. Stine. He writes lots of horror books. When I was reading this book I felt like I didn’t know what was going to happen. It gave away nothing. I like the time when Skipper found a picture of himself in a comic book the day after he visited the strange building that appeared out of nowhere.