The Mystery of the Runaway Scarecrow

The Mystery of the Runaway Scarecrow 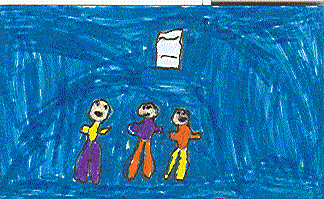 This story is about a missing scarecrow. Sarah-Jane’s scarecrow was supposed to be in the fall festival the next day, but no one could find him-he had been gone for days. Their family had pictures of the scarecrow, but they couldn’t figure out any clues. They had a letter that the scarecrow wrote, but they couldn’t find any clues from that, either. They dug a little deeper and found out clues from the pictures and the letter. They finally found the scarecrow. I like this book because I like mysteries. My favorite part was when the characters found a clue with the pictures. I like this part because it was a funny clue. I don’t like the pictures in this story because they are black and white. The pictures are big. I wondered about how they would find the scarecrow. I feel curious reading this book. I would recommend this book because I like solving mysteries. I think people who like mysteries would like this book. I think they would like the end where the mystery got solved.