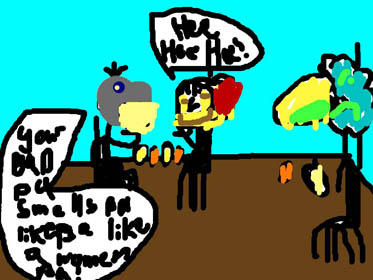 This book is about a wimpy kid in middle school who gets pushed around by his brother and other bullies. His friend is Rowley and they made up some type of weird language at Rowley's house at dinner. Greg Hiffly said, "Your pa dad pa smells pa like a women pa." That was funny, but not to Rowley's dad because he cracked their code. Greg will never go to his friend's house again. The next day Greg's dad went in the basement when his mom was asleep. Then she woke up and when she was going to the bathroom she saw his dad. Now Manny sleeps in mom and dad's bed because he is afraid of the monster that lives in the furnace room. On Tuesday Greg thought he was done hearing about Rowley's trip but Greg was wrong. In the book Greg and Rowley's Social Studies teacher asked Rowley to tell the class all about his vacation.

My favorite part was when Greg's brother spit milk in Greg's face. Rodrick was trying to get revenge because he had to eat vinegar with green beens and Greg didn't have to. I liked this part because it was so funny that the milk went in his face and he tried to clean it with a towel. This reminds me of the time my brother was pushing me and I spilled milk on the floor and I had to clean it up. Another funny part was when Rodrick was sleeping and Manny went downstairs to eat cereal and watch cartoons. Rodrick forgot to take out his movie and Manny watched a monster movie. Manny then drew pictures that were really scary and when Greg saw the pictures he said it gave him the heebie jeebies.

I would tell fourth graders to read this book because it is funny and has weird scenes. It shows people who are crazy. Fregley is a crazy character because he saves food in his belly button. I think that is disgusting, weird and funny. I really liked this book and I have enjoyed reading the other wimpy kid books.

Bejan A.
is a student in
Mrs. Brosnan's Class