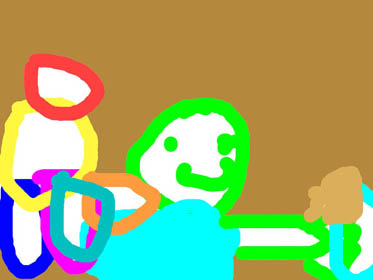 George thought his grandma was a witch and he wanted to change her so he decided to make a new medicine. George puts all the medicines in a pot and mixes them up with a stick that was in his garage. He gave it to his grandma. She went flying up to the ceiling and stayed there for a while. She came down and became was happy with George because she became big and went up to George's bedroom and broke the rooftop. He gave it to the chicken. It grew and mom came home from the grocery store. She saw a big hen and she saw the rooftop and dropped her grocery bag. To find out what happens next read this book.

My favorite character is George because he makes cool medicine. It's funny when all the animals in the farm grow big. It is also funny when he makes the second, the third, and the fourth medicine. The chickens that he gave all the medicines too were funny looking chickens.

I liked this book because he does funny stuff, like when he mixes up his mom and dad's medicine to create a new medicine for his grandma. When she drinks the medicine she grows really tall and breaks the roof of their house. The illustrations for this part are really funny because they show where George comes and gives the grandma the medicine.

I would recommend this book to second and third graders because they would really enjoy it. This is a book for kids who like to do funny things.

Aditya N.
is a student in
Knights of the Literary Round Table