Where the Wild Things Are

Where the Wild Things Are

Reviewed by student in Fun Club 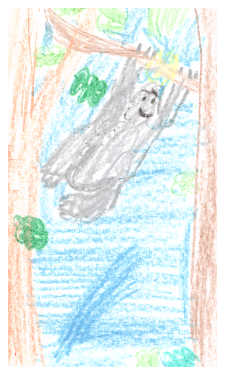 On a cold night a little boy named Max put on his wolf costume. He was making so much mischief that his mother said, “you are a Wild Thing”. And Max said, “I will eat you up”, and the mother sent him to bed without his supper. A forest started to grow in Max’s room and it became a whole world. Then Max gets on his boat and traveled for weeks and months through the ocean and saw a sea monster. Max sees wild monsters and they show there horrible eyes and horrible teeth and horrible claws. Max isn’t scared and gazes into the Monsters eyes without blinking and the monsters got scared. The monsters make max the king of the wild things. Max says “Let the wild rumpus start!” Later that day Max was lonely. After a week Max got back on his boat and sailed off back to his room and he saw his supper and it was hot.

We thought the book was a very good book even though some of us are older kids because it shows you that when you’re feeling upset you can go into your imagination and you’ll feel better and use your anger for something good instead of something bad. The book teaches us to not be disrespectful to your parents. We thought it was funny when Max said, “Let the wild rumpus start”. We also liked when Max got on his boat and he was almost sleeping. The animals aren’t regular animals, for example one animal is a bull with human feet and that’s pretty weird. We thought it was funny when the monsters showed their terrible teeth and terrible claws. We didn’t like when he didn’t tell the creatures that he lived in a home and he was misbehaving and didn’t want to be there. We also didn’t like when Max was being mean to the creatures and made them go to bed without their supper. It was funny that Max wore a monster suit and then became the king of the monsters. We didn’t like that his mom was probably worried about Max when he was gone.