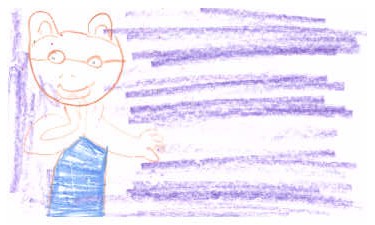 This book is about when Arthur was lying on the couch and he was reading his book called Bionic Bunny. DW came in asked Arthur to tell her a story, but Arthur was too bored. .Arthur was trying to make excuses so he wouldn’t have to tell DW a story. But when he was making those excuses he was really telling DW a story and making examples of why he didn’t want to tell a story. The excuses he was using were: he wanted to take Pal for a walk; then he was going to climb up a really steep mountain; then they would get burned by a volcano; then they would go to the jungle; and then DW asked, “Are there going to be any unicorns?” But everything that Arthur made up, DW wanted to be there.

I think the story was funny because everything that Arthur was telling DW was really a good story and really funny. Also, he didn’t know that he was telling her a story. I think it was mean that Arthur didn’t want to tell DW a story. I think some of the excuses Arthur was saying would be very fun, but also dangerous. The volcano was dangerous because they could have got hurt. I think that getting pictures taken by reporters is fun because you get to have fame for fifteen minutes. Also, I think that Arthur should have thought about what Pal was feeling about all of the things he was saying.

I do not recommend this book to people who do not like to tell other people stories. They will not like that Arthur is telling DW a story, because he told her before that he wasn’t going to tell her a story and he did anyway. I recommend this book to people who like to tell stories because they would like it. They would like it because he told DW a story. They wouldn’t like it because he didn’t want to tell her a story. He acted like he was too busy and made up examples why he didn’t want to tell DW the story.

Victoria U.
is a student in
New York Cares/Island School Reading Club