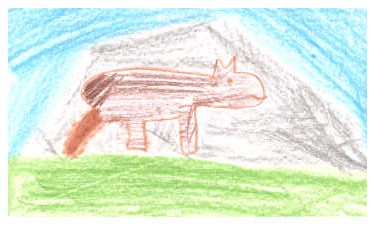 On a sunny summer day a girl named Lucy went to the secret closet and went inside and found a world called Narnia. She met Mr. Tumnus, a faun. Mr. Tumnus invited her for tea. Lucy told her brother Edmund about Narnia and how she met Mr. Tumnus and he didn’t believe her so he went inside the same closet and found an evil dwarf named Ginarrbrik. He pointed a knife on him. The dwarf was a servant of the evil witch that cast a spell on innocent creatures and made them stones. His sister Susan met these two beavers who led them to their dam and made them a nice meal. The beavers were fighting the witch. The wolf named Maugrim was an evil wolf that followed the witch. The wolves wanted to kill a fox that was trying to save the beaver and Lucy, Susan, and Peter. They were hoping to see the true king Aslan who will bring back spring and kill the evil witch and finish the battle between Aslan and the witch. Lucy grew up and went back to her own life.