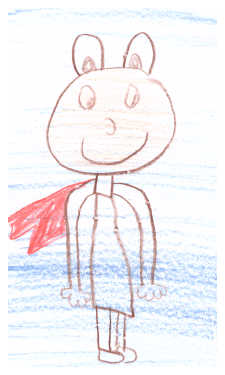 This book is about a boy named Arthur who wants to play all day, so he gets up and does his chores really fast. Arthur gets dressed really fast. Unfortunately when he calls his friends they all have to do something. Buster has to clean his room. The Brain has to help his mother in an ice cream shop. Francine has to clean her father’s car. Binky has to weed the garden. Arthur’s mother tells him to use his imagination. Arthur started thinking… He imagines he is helping Buster under a hill of clothes. He imagines himself helping Brain plug in the freezer. He imagines himself wrestling an uncontrollable hose. He imagines himself helping Binky free of vines that are tied around him. Even though his friends couldn’t play Arthur has had a fun day.

My opinion is Arthur to the Rescue is a good book. Arthur goes into his imagination when he’s gloomy and he becomes happy. I like the book because it shows when you’re bored you can do different things to be happy. You don’t always have to play with your friends to have fun. I didn’t like that his father didn’t have time for him. I would be pretty sad if my father couldn’t play with me. I like that Arthur pretended to be a super hero and he helped his own friends. I like the pictures because it was more graphic than the old books. We like that instead of Arthur being depressed he tried to have fun and it turned out well. It turned out well because he had fun in his imagination.