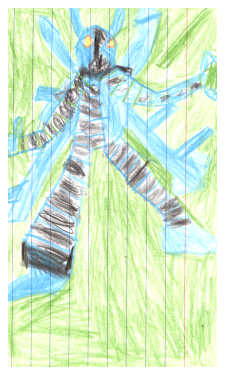 The book is about a teenager named Jaime who is the Blue Beetle. He defeats the villains that try to get a hold of him, but they never will because he has friends that have his back. A scary villain comes along and tries to fight the Blue Beetle because he thinks that he was the one who made him into a villain. His friend gets a milk jug and mixes potions to blow up the scary villain. Then they start packing to go on a road trip because they are looking for this energy to defeat the villains who are trying to rule the world. They find all this information, and now the villains want their energy to defeat the Blue Beetle. One of Blue Beetle’s friends gets transported to a jungle. Little monsters come out and they’re eating her for her blood. Then this warlord comes along and tries to defeat the little creatures that are eating her. The Blue Beetle comes and tries to defeat the warlord because he doesn’t know that he is trying to help his friend. In the end, Blue Beetle and his friends come alone to fight these spider-like creatures, and they win. In the end, this alien, the Negotiator, comes along and says to Blue Beetle and his friends that it is time to save the earth!

I think Blue Beetle is a character that is a human being who has gone through a lot of things, such as fighting villains and going through a lot with his family. I think he is nice as the main character, and I think whoever made this story made the Blue Beetle great.

When the Blue Beetle and his friends come along this code, they have to break the code up into pieces and follow each step one by one. So that’s why the world for them will never be the same because they have to fight villains and go through everything that they have never experienced in their life.

I think Blue Beetle would survive fighting these villains and he knows that his friends have his back. They come upon this alien that joins their team and wants to save the earth with them. I like that the book is exciting and I like the reactions from the villains and the superheroes. But most of all, I like when the superheroes save the Earth. What I don’t like about the book is when the good guys don’t realize that they fight these villains that are not exactly on the bad side. They don’t know that some of the villains are good villains.

I would recommend this book to kids of all ages and grown ups because this book has excitement, extremeness, and hero action. In this action-packed book, you will be wanting to see the next chapter, and I would recommend this book to my friends and my brother because my friends and my brother love comics. When we all get comics we can’t wait to see what is in them, and we love when things turn out right in the story. We also like when the superhero saves the day from the evil goons on the street. The superheroes love when things turn out right all the time. When things turn out right, they don’t have to worry about anything. I also know one more person who loves all of this, my best friend Jamyl.